Osteopaths specialise in manual therapy and consequently have developed and utilise a large range of techniques. The techniques range from very subtle gentle techniques to more direct techniques depending on the individual. Such techniques can include:

· Facilitated positional release – Similar to BLT. An indirect myofascial release technique, where the affected tissue is placed into a neutral position within the fascial system diminishing tension in the tissue and joint in all planes, with an added pressure to the affected tissue. (Schiowitz, 1977)

· Myofascial release (MFR), a system of diagnosis and treatment first described by Andrew Taylor Still (1828-1917). This involves continual palpatory feedback to achieve release of myofascial tissues. direct MFR –  a restrictive myofascial tissue barrier is engaged and loaded with a constant force until tissue release occurs. indirect MFR –  the dysfunctional tissues are guided along the path of least resistance until free movement is achieved.

· Muscle energy -this involves the patient activating their muscles on request by the practitioner, against a counter-force to bring about an increase in length or reduction of tone within a muscle tissue. (Mitchell, 1948)

· High velocity low amplitude thrust  – these are often referred to as ‘manipulations’ whereby a ‘clicking’ or ‘popping’ noise is heard. A joint is taken into a locked end range followed by a quick movement low in amplitude, so as to improve mobility. This technique is carefully selected only when appropriate following a thorough examination and case history.

· Cranial Sacral techniques -a gentle and effective form of treatment that encourages the release of stress and tension throughout the body and head. This is often used as an independent form of treatment, referred to as cranial osteopathy.

What to expect from an osteopath?

Patients consulting an osteopath are entitled to a high standard of care. Download Here 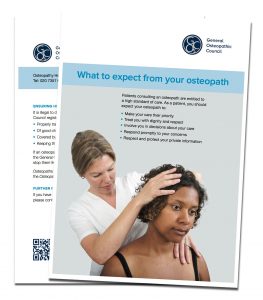