DO YOU SUFFER WITH FOOT OR ANKLE PAIN?

Basic functional anatomy of the foot and ankle 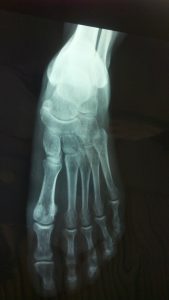 This intricate area contains 26 bones, 33 joints, 107 ligaments and 19 muscles that combine to hold the structure together, whilst allowing it movement in a variety of ways.

The ankle joint is composed of 3 bones:

Feet can mirror your general health. and conditions such as arthritis, diabetes and circulatory disorders can exhibit their initial signs and symptoms there.

It is more common for women to have foot problems than men, mainly due to footwear fashion and ill fitting shoes.

The foot has 3 arches:

The individual shape of bones and joints, the strength of the muscles and support from a network of ligaments generate these arches.

The foot can be divided into 3 functional joint complexes:

The function of the joint and ankle:

The movement of the foot occurs on 3 axes: 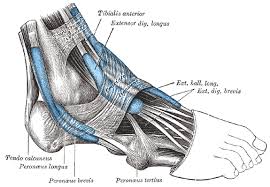 Muscles of the foot and ankle

During extension of the ankle, tibialis posterior contracts drawing the tibia and fibula together while pulling the fibula inferiorly and slightly into medial rotation. In flexion, the malleoli move apart allowing the tales to move, and the fibula to move superiorly with medial rotation.Í

The most common cause of ankle pain is a sprain. A sprain occurs when the ligaments that support the ankle become stretched or torn. This happens when the foot twists, turns or rolls as a result of fall or misstep.

Stress Fractures occur when excessive repetitive force is applied to a localised area of bone.  Walking, running, and repeated jumping can subject the bones of the foot to large forces, often leading to micro fractures, microscopic cracks in the bone.

Occurs when there is inflammation or irritation of the tendons, usually due to overuse or injury. Tendonitis can occur in a number of places around the foot. Foot and ankle tendonitis can affect any of the tendons in the foot resulting in conditions such as Achilles Tendonitis and Extensor Tendonitis. Common symptoms are pain, swelling and stiffness.

Represents itself as pain and swelling in the Achilles tendon, it can also cause heel and calf pain. It is often associated with an increase in activity level and tends to occur in patients in their 30s and 40s.

This is more common in women who wear high heels and have difficulty in placing the bare heel to the ground.

This is the most common cause of heel pain. Pain from plantar fasciitis is often most noticeable during the first few steps after getting out of bed in the morning. The plantar fascia is a thick band of tissue in the sole of the foot. Micro tearing at the origin of the plantar fascia on the heel bone (calcaneus) can occur with repetitive loading or after prolonged standing. Support of the longitudinal arch can help to ease pain.

In 70% of cases the ankles are affected together with other joints. There is a swollen, tender joint which can be accompanied with ill health.

Affects mostly the big toe, however it can affect another toe, the ankle, knee and even finger. It affects men more than women. Generally, only one joint is affected with acute irregular pain, swelling and redness.